Binge-watchers from all over are asking the important question, “Is the Outer Banks Netflix show filmed on the Outer Banks?” The answer is no. You’re actually seeing scenes from Charleston, South Carolina. However, there’s good reason for Netflix to create an entire series based around our beloved barrier islands of North Carolina. The Outer Banks of North Carolina offers beautiful scenery, incredible landmarks, and a certain magical charm or nostalgia that will remind you of your childhood shenanigans and teen years.

If you’d like to visit the iconic place that inspired a number one streamed show on Netflix, make sure to unlock the treasure that is your free OBX Vacation Guide! Inside, you’ll find an extensive list of beautiful landmarks, museums, outdoor recreation, and other popular spots on the OBX.

Producers of the teen drama originally planned to shoot the series in Wilmington, North Carolina, but after NC passed the House Bill 2 legislation or the “Bathroom Law,” Netflix moved their plans a little further south to Charleston, SC.

According to Wilmington Star-News, the show’s writer and director Jonas Pate said, “When wrote it, it was 100 percent Wilmington in our heads. We wanted to film it here. But Netflix made the right decision to insist on inclusivity and we completely agree with them.”

Since then, the North Carolina legislature partially repealed the bill.

Outer Banks Filming Locations & How They Compare to the Outer Banks

You can find main characters John B. and Sarah Cameron running all over the fictional Kildare County of the Outer Banks, which is actually Mount Pleasant, SC. But, we can’t help but think Kildare County and its name come from the Town of Kill Devil Hills, NC, in Dare County!

You’ll see many shots of Charleston restaurants that set the coastal, southern vibe of the show, like The Wreck of Richard and Charlene or Geechie Seafood on Shem Creek.

Shipwrecks, the Quest for Treasure, and The Graveyard of the Atlantic

The Outer Banks is notorious for its rich history of pirates like Blackbeard, as well as the 3,000 shipwrecks that give the OBX its nickname “The Graveyard of the Atlantic.”

The show gets inspiration from this fascinating piece of the Outer Banks when John B. and his friends find a shipwreck in the first season with a clue to help solve the mystery of why John B.’s father went missing after searching for treasure for 20 years.

See the Real Outer Banks for Yourself! 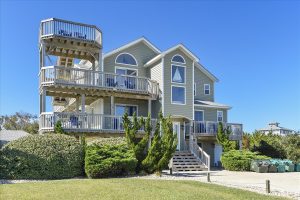 Want to see the real place that inspired the hit Netflix series? Then, it must be time for an adventurous Outer Banks vacation! Stay in the best OBX vacation rentals when you book with Paramount Destinations. You’ll surely find treasure when you book a beach house with your ideal amenities like private pools, hot tubs, beach access, and pet-friendly amenities.

If you’re an Outer Banks fanatic, make The Crabby Mermaid in Corolla the home base between all of your OBX adventures. You’ll feel like you’ve struck gold with the in-ground pool and private hot tub!

Check our availability and start your treasure hunt today!