Our barrier island destination in North Carolina has so many popular attractions that are always a fun time, but if you’re curious like us and want to get into the mysteries and history of the island, you need to discover some Outer Banks hidden gems! From 1920s mansions to the very first flight to an underground railroad network to freedom for slaves during the Civil War, the OBX has tons of hidden gems worth searching for!

And, if you need more things to do after finding each of these gems, make sure to unlock our FREE Vacation Guide. You’ll get exclusive access to the best restaurants, outdoor recreation, and other OBX attractions!

Have You Found These Outer Banks Hidden Gems?

Get a deeper understanding of the contributions the black community had in Outer Banks’ history and go on an NC Black Heritage Tour. The African American Experience of Northeast North Carolina (AAENENC) provides you with several incredible Outer Banks attractions with African American influence, including Pea Island Cookhouse Museum, Freedman’s Colony, and Hotel de Afrique.

This historic site is home to the first and only lifesaving station in the United States manned by an all-black crew and former slave/Civil War veteran Keeper Richard Etheridge.

Hotel de Afrique was a national underground railroad network to freedom on Cape Hatteras National Seashore, where African Americans would trade their skills as laborers for food and shelter. You can learn all about Hotel de Afrique and the Civil War Union victory of 1861 at the Graveyard of the Atlantic Museum.

Step into a scene from The Great Gatsby and explore Whalehead Club, a 1920’s style mansion-turned-museum. Take a tour of the musem and learn about how the 21,000-square-foot mansion by the sea started as a luxurious 1925 hunting retreat.

Go on one of several Outer Banks wild horses tours, and you’ll travel along the beach, and to different attractions in search of wild Spanish Mustangs. The guided tour teaches you about the majestic creatures and their impact on the OBX.

See the very spot on the Outer Banks where the Wright Brothers took the first flight in all of history! The Wright Brothers Memorial is home to a 60-foot granite structure honoring the aviation pioneers, as well as a flight museum, park, and visitor center.

How would you like to not only see the tallest sand dune on the Atlantic Coast but also jump off it with an adrenaline-inducing hang-gliding experience? Jockey’s Ridge State Park is the place to do just that! There, you can hike, explore wildlife, and take hang-gliding lessons with Kitty Hawk Kites.

Bonner Bridge was a nearly 3-mile bridge from 1963 that crossed Cape Hatteras National Seashore and the Pea Island National Wildlife Refuge. After pedestrians used the bridge for years, the attraction was replaced in 2019. Today, you can walk, bike, and run the new Marc Basnight Bridge!

Head to Manteo on Roanoke Island to discover the Lost Colony. It’s an unsolved mystery that you’ll be enthralled by and an important piece of U.S. history.

The popular outdoor theater attraction gives you a theatrical look at how 117 colonists established the first of English settlements in the New World on the Outer Banks and mysteriously disappeared shortly after. It’s an intriguing Outer Banks gem you don’t want to skip! 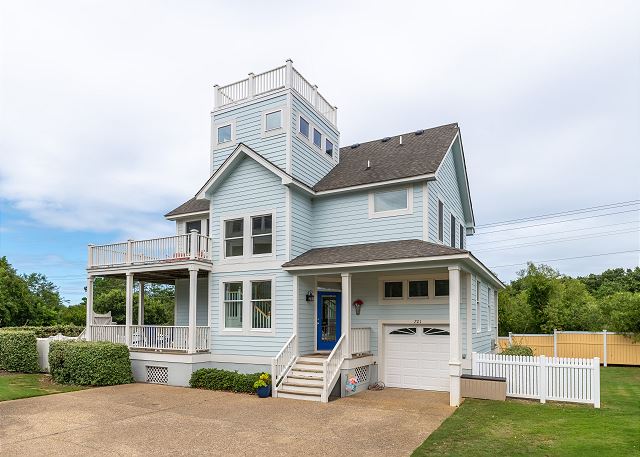 11. The Hidden Gem of All Places to Stay on the Outer Banks | Paramount Destinations

Book a stay in the best Outer Banks vacation rentals for your next getaway! Paramount Destinations offers a large selection of intimate or large, family-sized vacation rentals throughout the Outer Banks in neighborhoods including Corolla, Duck, Southern Shores, and beachfront, so you’ll be near all the attractions and Outer Banks hidden gems!

Get a few of your close friends or your family together for the most memorable North Carolina vacation, and check out The Hidden Gem, a 4-bedroom vacation rental in Corolla!